The idea for this animated short film emerged some time ago as a final project for academic formation in digital design and animation. I was able to pick it up due to the quarantine and add details that I had in mind, the music and sound effects, and the voices (with which my partner collaborated). This episode is intended to be the first in a series. A pilot, if you want …

As for the technical details I use the Adobe suite (Illustrator, Photoshop and After Effects) and Audacity for the sound. For the 2.5D look in this case I used 2D layers oriented on their axis to give the 3D impression. Then I worked on the enviroment with the AE cameras and lights.

Update with the full development of this animated short:

The idea of ​​the project is to make an animated short comedy. About an artist, a painter. Strong personality, energetic, but above all superb. He truly believes that he is the best artist in the world, which is why he adopted the pseudonym “The Artist”. The intention is to use humor to empathize with the character, who is practically an anti-hero.

Sequence 1. Scene 1.
Inside an art studio. It is day. The protagonist, “The Artist”, is seen from behind painting on the canvas. This is a painting in progress.
-The artist: (murmurs). No, this doesn’t look very good.
He lowers his head while gesturing negatively. He looks at the painting and throws it on the floor.

Sequence 1. Scene 2.
Again the protagonist is painting on a blank canvas but soon becomes frustrated and throws it to the floor savagely while he screams.

Sequence 1. Scene 3.
The protagonist in profile is seen painting very softly on the canvas smiling, then he sticks out his tongue trying to perfect his technique as he does not come out as he expects he becomes more and more frustrated. That frustration turns into anger. He starts screaming as he waves the brush on the canvas wildly and then starts hitting the brush on the canvas, smashing it and splattering red paint. everywhere, even on him.

Sequence 1. Scene 4.
He is finally seen giving a karate punch that breaks the canvas he was painting on as he yells.

Sequence 2. Scene 1.
The protagonist is drinking coffee and rests it on the table, where there was a blank canvas. While he drinks coffee he thinks out loud:
-The artist: “Oh, I don’t know what I’m going to present in the exhibition, nothing is good enough, no painting is at my level”
When he sees something that catches his attention. He focuses his gaze on the canvas, which is stained with coffee.
-The artist: “Wait, what is this?”
He is surprised to see the figure that he drew with the coffee stain (a brown circle for having supported the cup).
He looks at the camera smiling.

Sequence 3. Scene 1.
Inside an art showroom. You see the picture with the coffee stain. Which is now presented as a great work of art. On one side you can see the protagonist and on the other side the presenter. While they are surrounded by photographers and visitors marveling at the painting.
-Present: “And here is what was promised, the last great work of the unmistakably talented and incomparable‘ The Artist ’, applause please.”

The backgrounds are the protagonist’s study, which has a cold atmosphere, but with a large window from which warm, daylight enters.
An asymmetrical balance was sought with the staging. With diagonal lines, distributing the weight of the composition to make it dynamic, giving a lot of movement to the scene. This happens in the first fund and in the last one. When he is in profile, the second background is used, at that moment he is looking for peace to be able to paint, so it makes sense that the horizon is in a straight line. 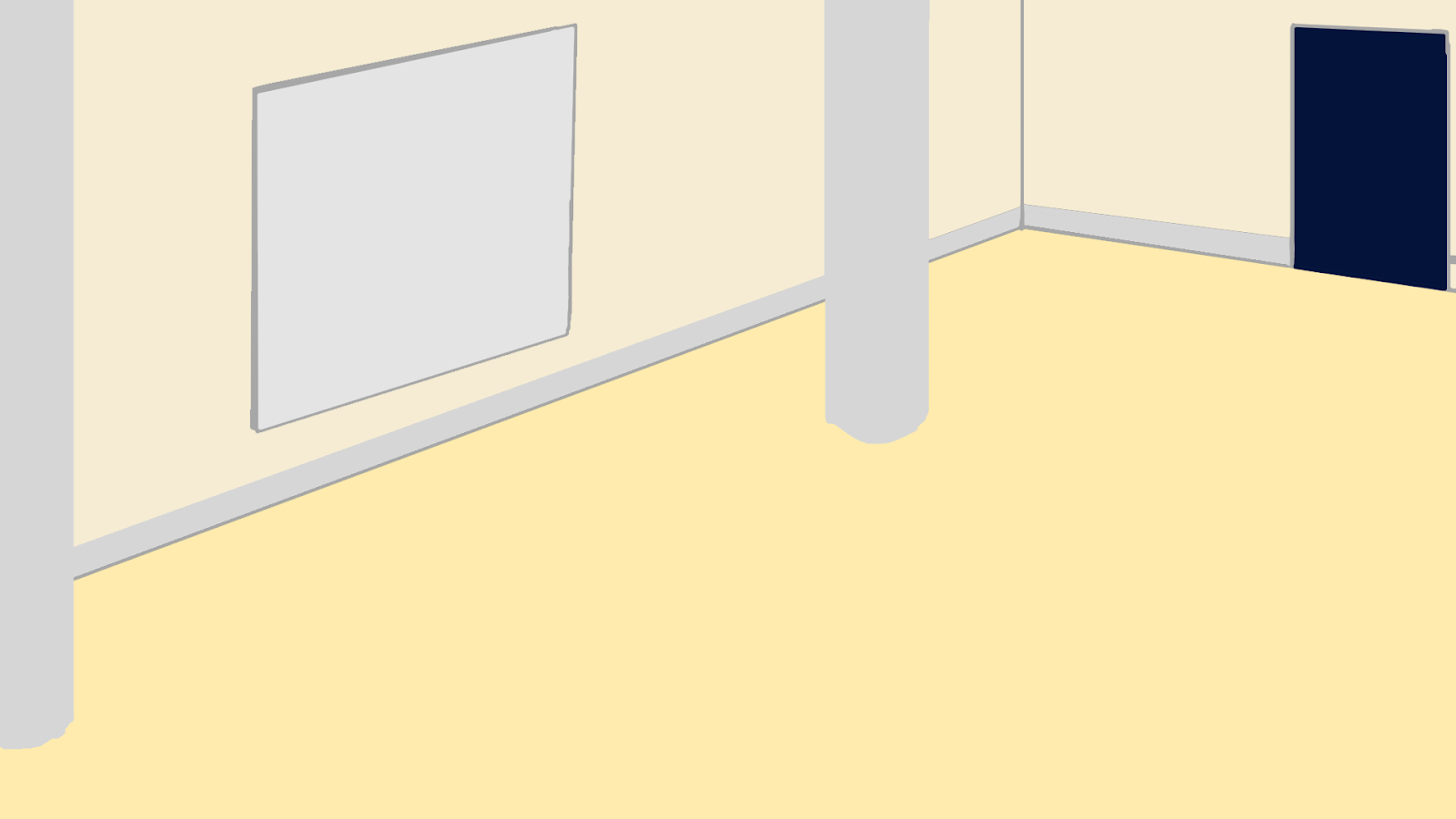 The design of “The Artist” is based on angled figures, to convey that he is not a very good person, in that case a design with more curves in his features would have been sought. For this reason, in the character design sketches you can see the contrast between the different styles, the more angled shapes express strength and determination, but it is not a muscular and strong man, nor is it a villain. That’s why his hair is wavy, it gives movement and some instability to the character.

The colors of his clothes are cold, precisely to accentuate the idea that he is not a very accessible character. 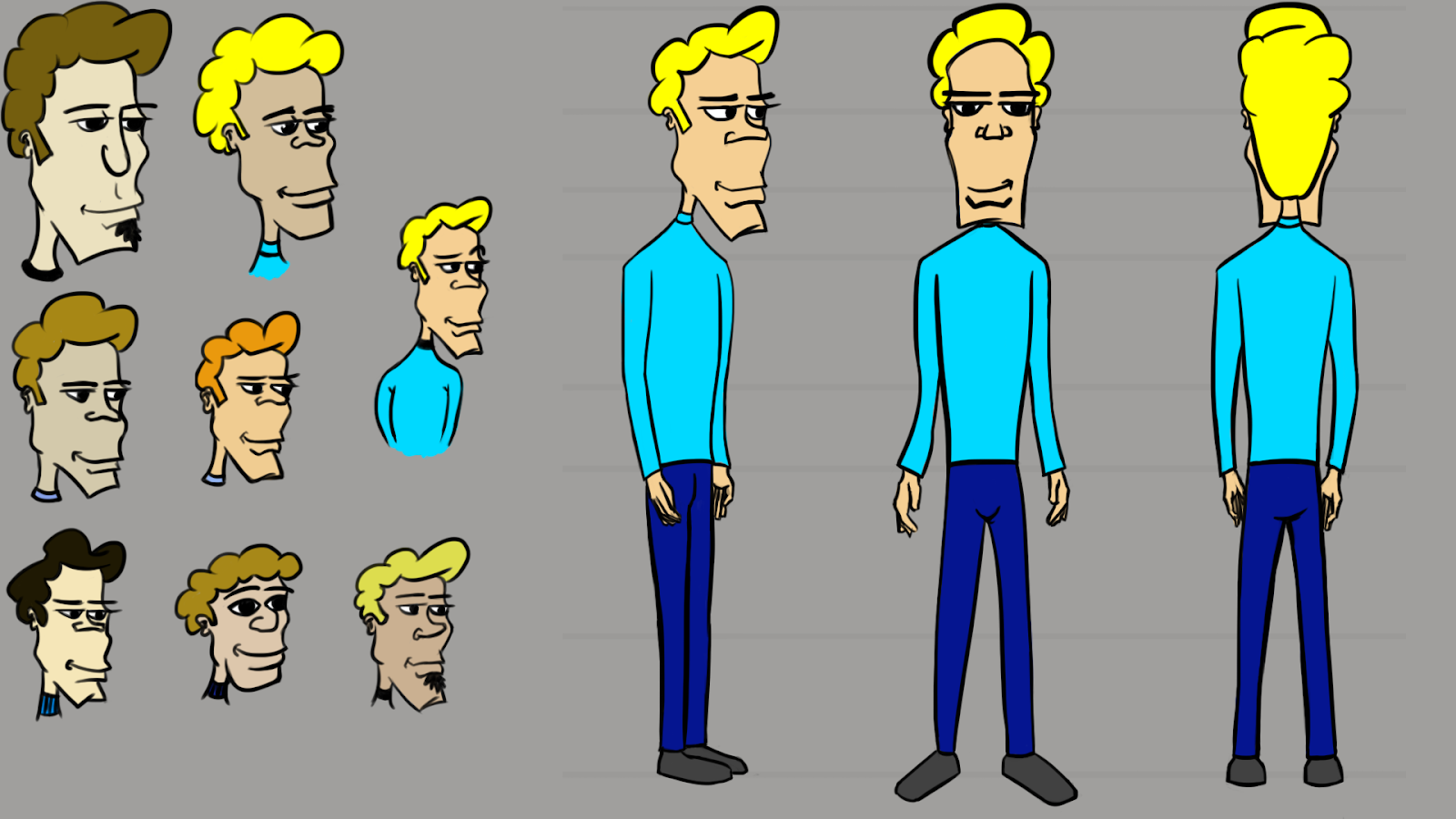 The presenter is a very good woman, she likes any expression of art and literally she likes everything. That is why she is genuinely in awe of the protagonist’s works.
She is eccentric and energetic, hence the saturated color scheme, demonstrating that personality. Saturated orange shows enthusiasm and action, lots of energy. 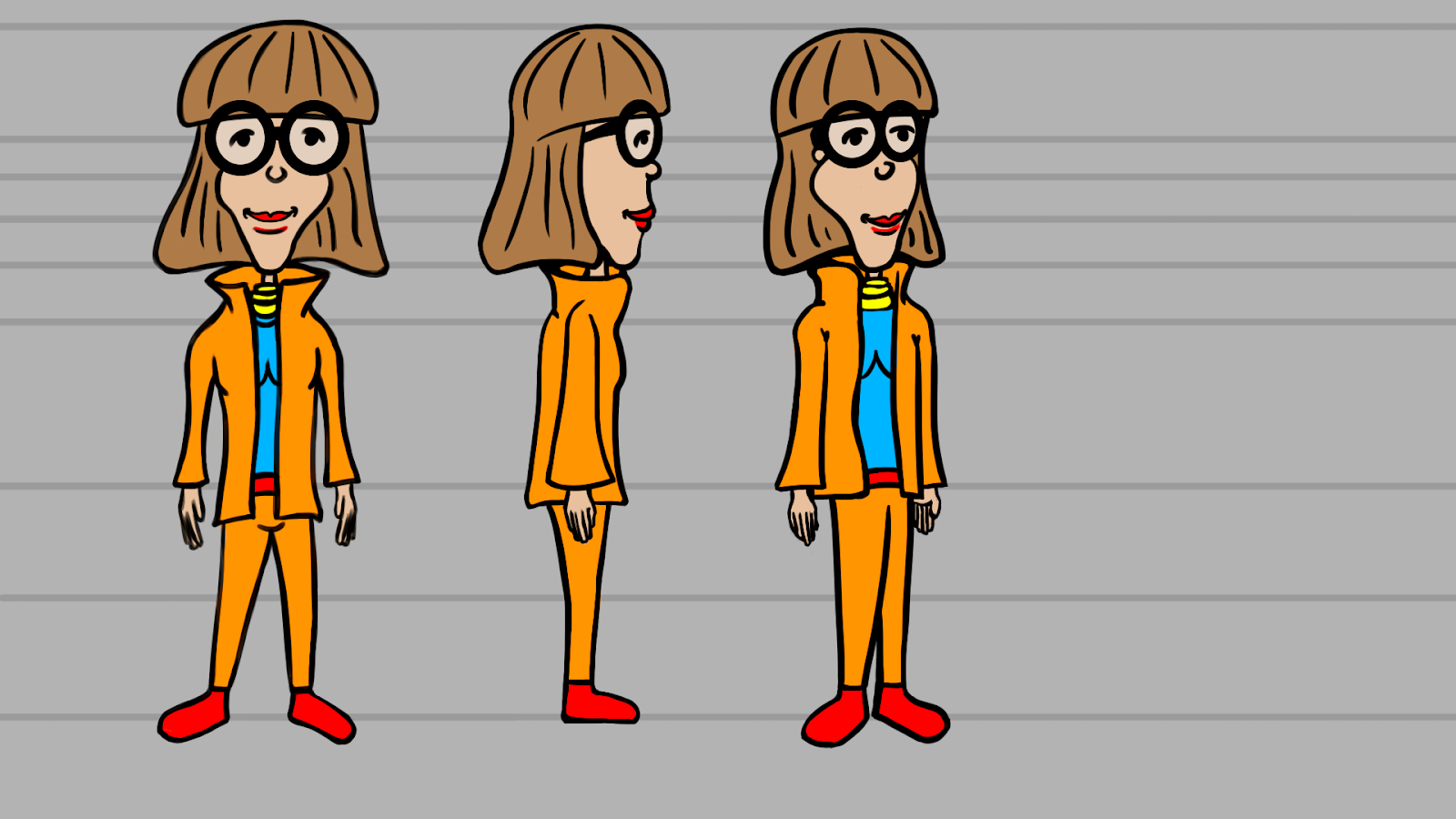 Of course, these are sketches and the concepts will continue to be developed, as well as the rest of the details in the illustrations. 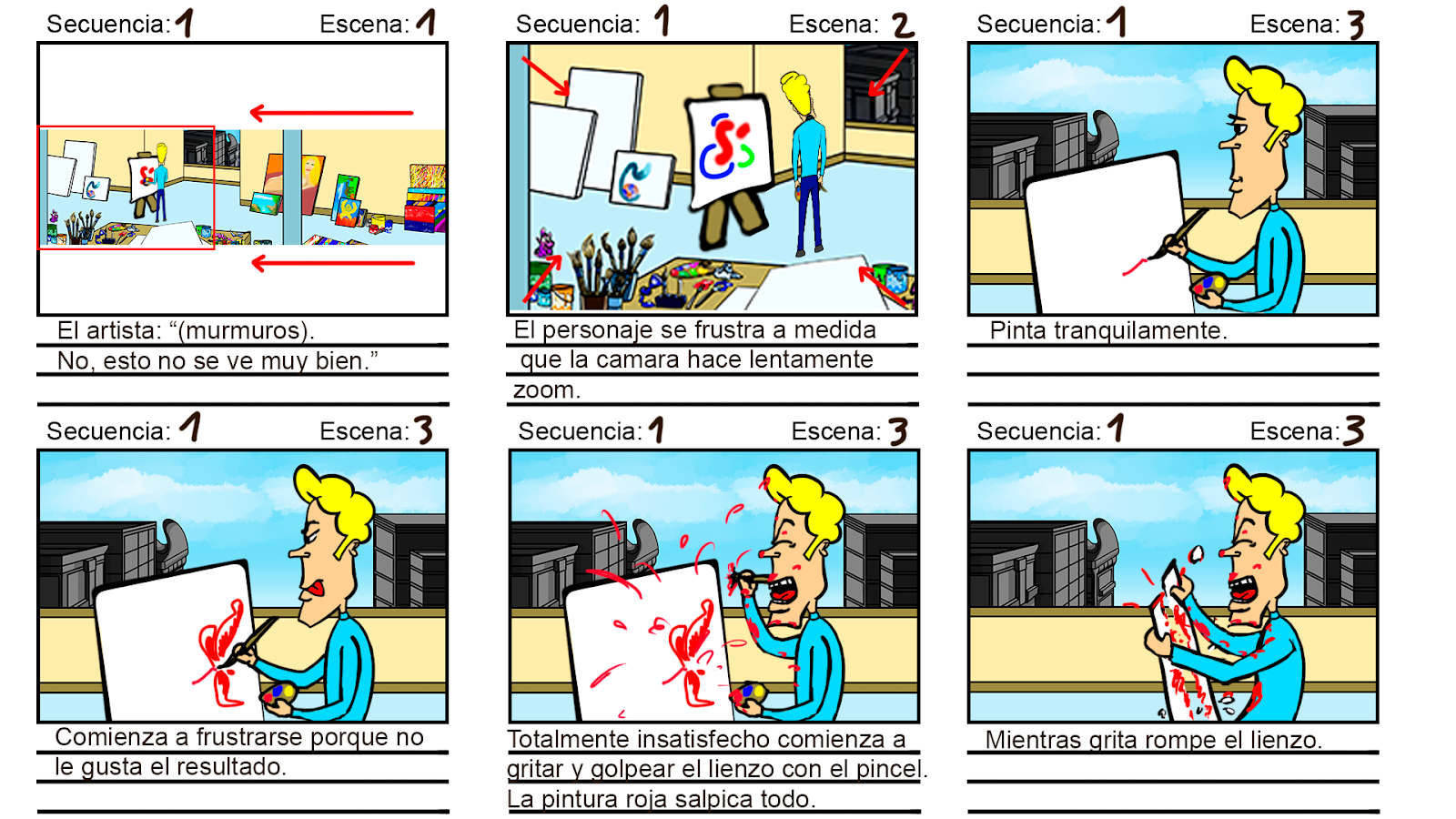 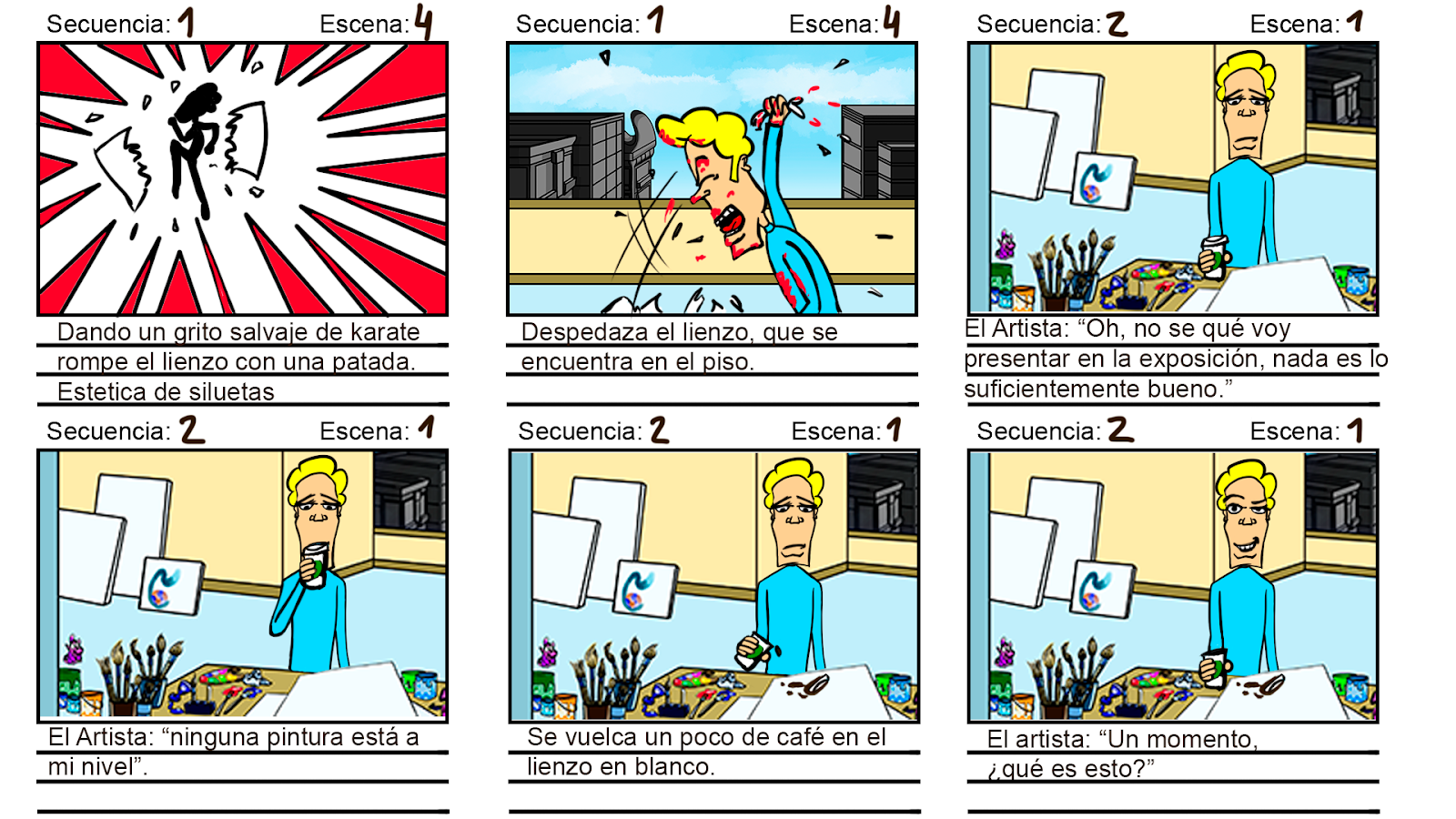 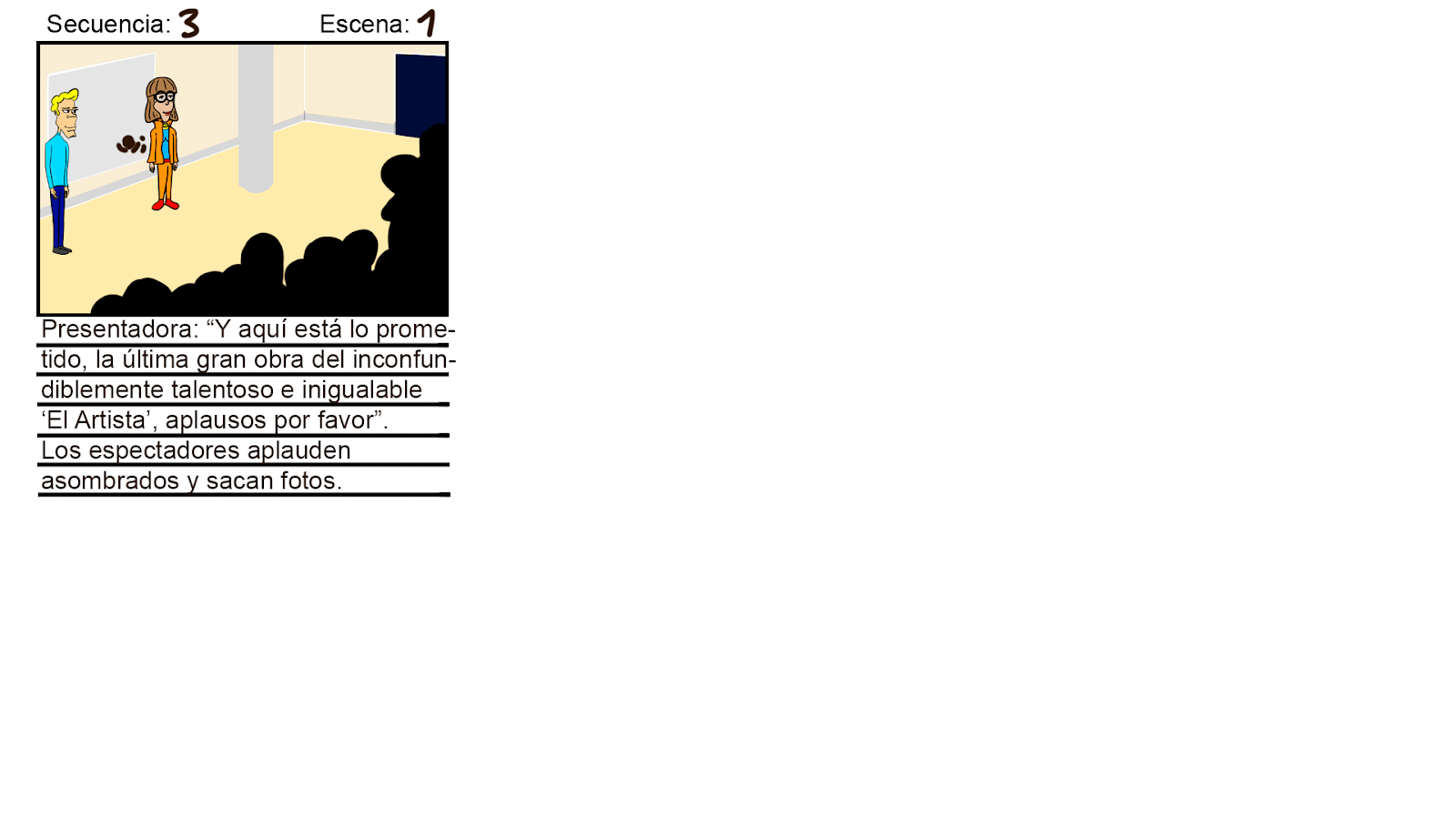 The type of animation that is intended is cartoon style, but realistic. Taking as a reference base those mentioned above from “Bojack Horseman”.

The layers are made up of: Head, torso, arms, hands, hips, legs and feet. Then with the puppet tool we proceed to make the different areas that must be articulated, such as elbow and knee. This would be for the back pose. In other positions, it must be adapted to each position.

1.- The animated short basically has a monologue of the main character fighting with himself to obtain the best result in his painting. That is why what he is saying is to reinforce the spirit that he is expressing, his frustrations. It reaches its climax when a canvas starts in the middle of a kick, at this moment I decided to incorporate a very characteristic sound (at this point it could be said classic of Western culture) from the “Kill Bill” movies, with all that this entails. , that is to say, danger and violence.

As the “The Artist” gets frustrated, different blows and thrown objects can be heard. In addition to the tone of his voice that he changes with his mood. Ultimately everything works out in a favorable way for him, which is why music sounds rather triumphalist and optimistic at the end. Also, as it is an art gallery, the applause and favorable comments are in tune with this scene.

The rhythm had to accompany the different situations that were presented, for that reason there are approaches and distances according to the situation. From the beginning, the idea was to show everything in a very dynamic way (except for the moment of the kick that breaks the canvas in two, culminating in frustration), because after all, what you see is a person painting. Some interest had to be achieved, so it was very appropriate to start with a traveling until discovering the character painting, passing through his paintings. even adding humor from the beginning where first a column and then a bust of hers cover the breasts of a painting of a nude woman. That tone of humor should be maintained with a good dynamic rhythm between scenes. The cuts with fade to black are to convey the passage of time, those are the moments that cut the dynamism. After all it is about frustration and not a bombardment of adverse situations.

The color from the beginning was also selected with the sense of transmitting a certain warmth in the environment, but coldness when approaching the main character (that’s why the cold-colored clothing). The “climactic moment” of anger comes in the form of a white silhouette with a frame of red points towards the center and white “electric” stripes, with a black background. This proposal seemed very adequate to convey the concentration of frustration, a white figure (the concentration of all colors in RGB). To achieve this effect, the level effect of Adobe After Effects was used.

2.- As for self-criticism I have many, I would have liked to have more time for a better result, I am sure that with a little more time I could have fixed all the details I had in mind, such as applying lights. There are many things to improve. Of course, I will continue to fix it until it is as I wanted. Unfortunately the deadlines are like this and that is a great teaching, I take it. Although it is my first animated short, I think I can get many positive things, starting with the use of the Adobe After Effects software.

I think I improved the timing and the fluidity of the short a bit, but the result is still not entirely satisfied. One of the main drawbacks I had was technical difficulties animating with puppets tools (I had to discard Duik for this project, I tried but there was no way I can use it well).

I think the adjustments to be made are to improve the sound quality, integrating everything better and the synchronization with the whole set. That was one of my biggest difficulties that I hope to perfect with experience.

I think that visually the animated short is quite good and that if I dedicate a little more time to it, something very good may remain, really and that makes me very good.

Sketches and stuff that I later added or modified in the new version:

The secondary characters were animated with layer positioning, rotation and scaling, and some puppet tool.

I animated the main character with the Duik Bassel plugin in the new version.

This is a full picture of the characters on the 2.5D stage, with lights, all within AE. These are 2D layers rotated on their axes within 3D space. Moving the AE camera into this space is what gives it depth and I personally love the result.